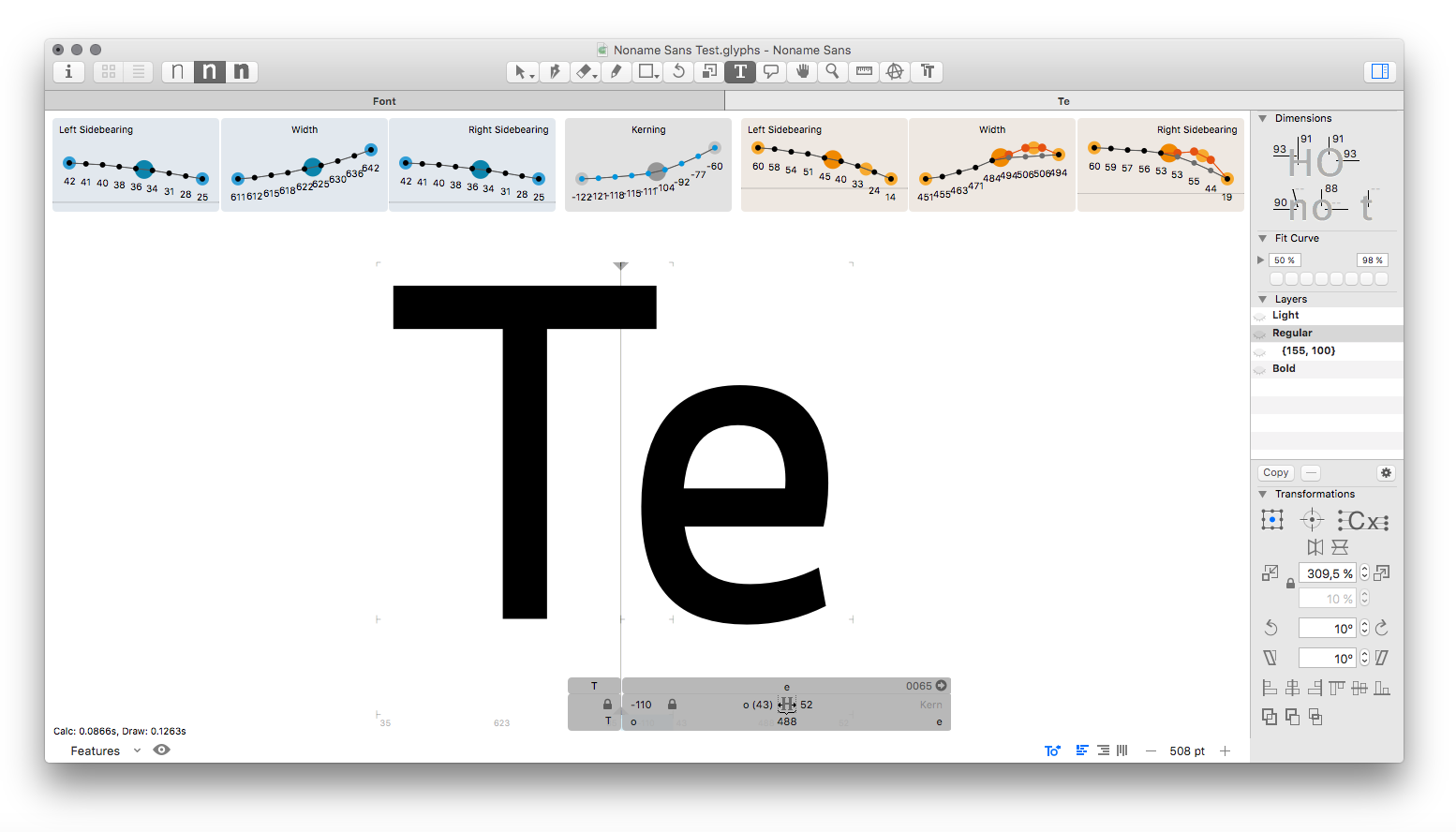 Space Bar is a plug-in for the popular type design application Glyphs.app that gives you a lot more insight into the spacing and other metrics of your font. It is particularly handy for working on a font with multiple masters.

The tool visualizes metrics values that cannot otherwise be seen while editing. Because you’re working on a master, you can’t see how your changes play out across all your defined instances.

As with many of my other tools, present and past, Space Bar only makes information visible and does not suggest a particular fix.

As so often, I started developing it as a tool for my own design work and then found it useful enough to make it into a product. Many years ago I had a similar tool named Autopsy that would render the metrics values of selected glyphs into a PDF for review. But modern type editors allow for real-time illustration of values, so I thought it could be of much help to look at them while designing and spacing.

Space Bar is open source software and can be installed free of charge from Glyphs.app’s built-in Plugin Manager.

How to use:
Once installed you can show the Space Bar through Glyph’s View menu. A right-click into the edit space will show a contextual menu where you can add or remove values that you want to compare.

Using the Text Tool (that you use for spacing and kerning) it will show the panels of the glyph left of the cursor (if there is any) towards the left of the Space Bar, the right glyph’s panels on the right, kerning between them in the center.
In the outline edit view (Select Tool) it will show the active glyph on the right (as if the cursor were left to it, which it actually will be once you switch back to the Text tool).
You’ll get the hang of it.

The kerning panel will show the values at the cursor position.

The panel Interpolation Space shows the defined instances of your font. If you’re following established interpolation theories about stem width growth this panel will show your instances in a curve of a certain characteristic.
The idea behind the tool is that most other values (such as side bearings or kerning) would want to show a similar curve. The problem is that you can only work on one master at a time and you’re somewhat blind to the values of the other masters, and whether they increase as smoothly as you want.

Classic example: You work on a typeface with a Thin, Regular and Bold master. You find yourself having to kern the Regular master of a certain pair quite a lot, but the other two masters not much at all. This could mean that the spacing in your Regular master is quite loose and you may want to address the spacing first before you counteract bad spacing with unnecessary kerning. 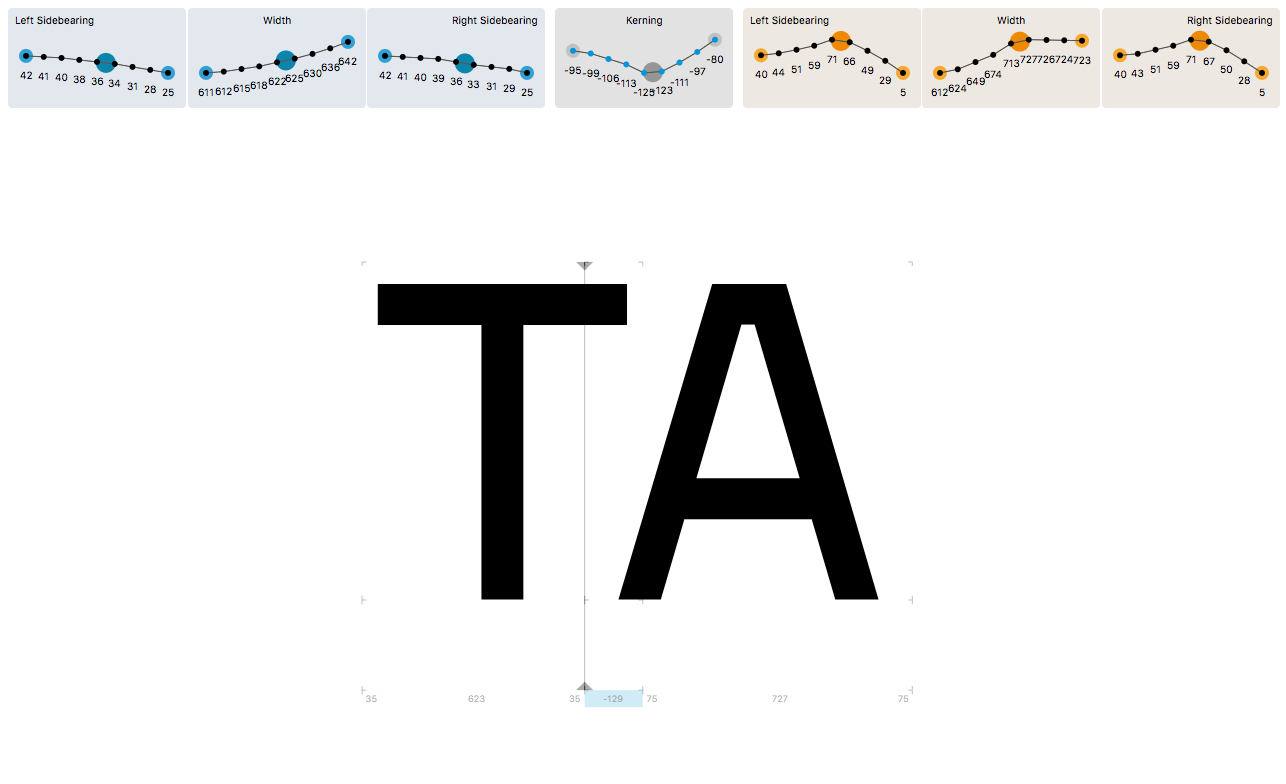 You need to kern a glyph pair quite a lot for one master, but the panels on the right side show that the problems lie in the spacing of the A which you should correct before applying massive kerning.

Working with deviations:
Glyphs’ implementation of bracket and brace layers allows for deviations of master interpolations on a per-glyph basis. For instance you could insert another master layer just for the letter ’e’ sitting in between the Regular and the Bold master. But again, you’re only editing masters, not instances, so Glyphs doesn’t show the correct context (interpolations of neighbouring glyphs at the same interpolations values) for these brace layers while editing, you may end up designing unwanted deviations in proportions or spacing for these glyphs. Space Bar shows them as a red line in relation to the ’naked’ glyph without bracket or brace layers. The numerical values shown apply to the deviations (red line), not the naked/original values. 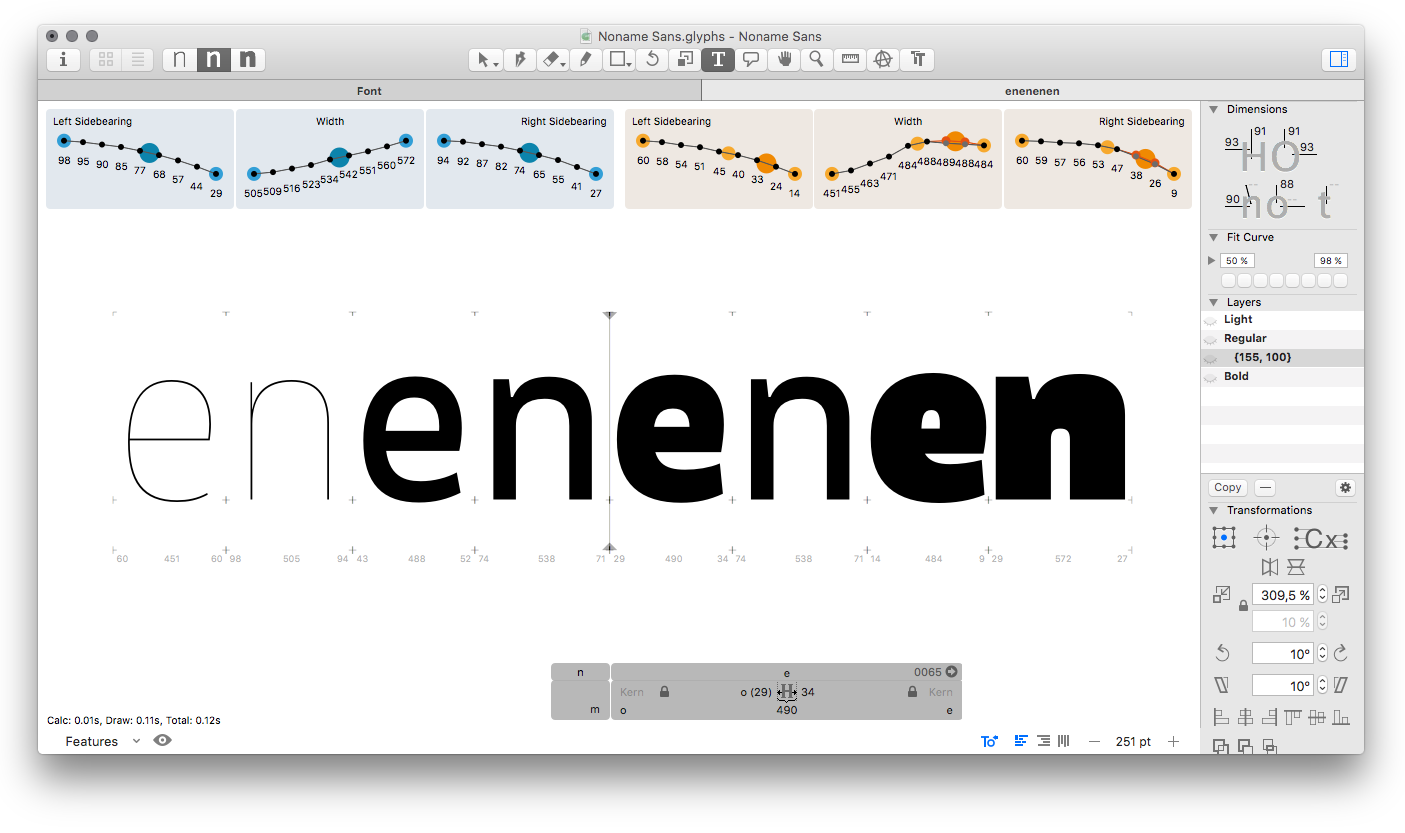 The third ’e’ is an intermediate instance (brace layer) and Glyphs can’t show other glyphs in the same interpolation for reference.

Limitations:
Instance view: Masters will only be included in the panels when the displayed instances are under influence of two or less masters (for instance, a master sits between two instances on the weight axis and shares the same width value with the instances). Also, the position of brace layers can only be included when they share the same width value with the instances.
The panels are only capable of one-dimensional display of values (per value), so displaying instance-related values for a font with possible instances in a three-dimensional interpolation space would require a four-dimensional display, and that’s of course not possible.
Rounding: Also, because of tons of rounding issues, the deviations only display when they are higher than 1 unit. Otherwise deviations would have shown even though there aren’t any. This might be fixed in the future. So if you need to be 1-unit-precise with your font you will need to resort to your own QA routines.
Kerning: Because of a bug that has been fixed in Glyphs 2.4.2 (Build 996) the kerning panel will not show values for builds older than 996. Please update to the latest cutting edge version of Glyphs to use this panel (check your preferences).

Version history:
Version 1.01: Reaction on API changes in Glyphs 2.4.2
This version of Space Bar is not backward-compatible with the stable Glyphs.app version 2.4.1, eventhough this should have been possible.
It is intended for the latest Cutting Edge versions of 2.4.2 (at least build number 1035 as of this writing, maybe older ones, too) and will be compatible with the upcoming stable release of 2.4.2.
Version 1.0: First stable release. Added support for right-to-left editing. Changed contextual menu style for future Glyphs versions.
Version 0.902b: Option to hide inactive instances, support bracket layers, added visual illustration of deviations caused by bracket and brace layers, added colors for better distinction between the two displayed glyphs
Version 0.901b: Minor fix
Version 0.9b: Initial release

Software requirements:
Space Bar requires a Glyphs.app version 2.4.1 or newer. When in doubt, please make sure to update Glyphs to the latest cutting-edge version.